None
chevron_left
Skip to main content
Jiří and Zdeněk Steiner, description of…
keyboard_arrow_right

Alexander Schmiedt, the experiences from Kaufering and Dachau

Testimony of Alexander (Shlomo) Schmiedt, which became a part of the “documentation campaign” in Prague. Schmiedt was deported from Prague to the Theresienstadt Ghetto in July 1942, from where he was sent to Auschwitz in the fall of 1944. He was liberated in the Kaufering concentration camp. After the war, Schmiedt became one of the main co-workers of the “documentation campaign” in Prague and later emigrated to Israel.

From July 1942 to the end of September 1944 I was in Theresienstadt. I went on the first of the labor transports to Auschwitz, where I spent 5 days. On October 5th, we were stuffed into cattle cars and went through Olomouc, Vienna, and Salzburg to Kaufering. The journey took 3 days and we had a 1½ kg loaf of bread, 10 dkg of margarine and 10 dkg of salami. But we were happy to be leaving terrible Auschwitz behind. At the Kaufering train station, our transport (about 1,500 men from Theresienstadt) was divided and I arrived together with about 500 men to 3rd camp. The first 2-3 weeks it was bearable. There wasn’t a lot of food, but we still had a certain amount of bodily strength, and therefore we weren’t that starving. But with the increasingly cold weather the food rations got smaller and smaller and in November our first friend, Meir Lindenbaum, died. After that, the chain of illnesses, misery, and death was never broken. The camp contained about 1,800 men, mostly Hungarian Jews, and you were basically lost if you couldn’t speak Hungarian. We lived in the so-called Erdbunker – long, underground buildings with a single window, two rows of boards for sleeping, and a stove and a chimney in the middle. Every prisoner had a blanket, a bowl, and a spoon. I worked in the so-called Holzman commando digging in the forest. After several weeks of work, most of my friends had feet covered in sores and frostbite, and could barely drag themselves to their workplace. This was the construction of an enormous munitions plant, in fact of a whole town hidden in the woods. The forest was about 2 km away from our camp. In the first few months, one had to work even if one had open, festering sores and a high fever. Every day they would bring back from the commandos the bodies of friends who had died while working. Later, the sick people’s situation improved slightly, but the food got worse. In the beginning, we were given about 37 dkg of bread per day, Zulags (2 dkg of margarine, or a slice of salami, a piece of cheese, a pinch of butter, a spoonful of marmalade or synthetic honey), and a liter of watery soup in the evening. Workers were also given about 20 dkg of bread with margarine and warm water (soup) at noon at the place where we worked. In the end, the extra food for workers was cut and the portion of bread fluctuated between 15-25 dkg per day. The workday went like this: alarm at 4:45 in the morning, roll call at 5:30 in the morning, 7:00 leave for work, at 6:00 in the evening return from the commando, roll call, get in line in front of the kitchen. Lights were turned off in the bunkers at 9:00 at night. This was the schedule and the food was a regular häftling. The camp’s block staff, medical staff, and others had significant privileges in terms of the food they were given, as well as at their work, lodgings, and the clothes they received. The Lägerältester, his representative, and the leading capos were aryans. They were housed separately and the kitchens prepared food especially for them. Like everywhere else, people were afraid of infectious diseases,

insert_drive_file
Text from page2
especially spotted typhus. The gravely ill were transported to the Krankenlager. All of us knew that there was very little hope of returning from there. Most of the sick were from the Moll commando, where working conditions were unbearable. After a commute of 1½ hours, we worked for 12 hours with a half-hour break and then once again the 1½ hour long commute back home. Work was hard (carrying bags of cement, laying cement, etc.) and the only food we received was a bowl of cold tea made from grass. The strongest of us didn’t last longer than 3 weeks. Many of our best people, mainly from the 1st camp, lost their lives there. Out of the 1,500 men who came to the Kaufering camps, in my opinion, 40-50 returned. On March 8th, a transport left from the 3rd camp to Türkheim (5th camp) 1Note 1: Kaufering - Lager V was Utting, Lager VI was Türkheim. I was also slated to be transported and I was happy because I told myself that nowhere could be worse than Kaufering. For the first few days I regretted it because we were so hungry, but the conditions soon improved and during the last weeks we received peeled potatoes every day – the most ideal camp food, not only because it filled one up better than soup, but it contained on the side potato peels, whole bowls of which, with a bit of luck and impertinence, could sometimes be collected from the capitalists. I worked during the the first three weeks in Türkheim – unlike in other camps, we were guarded only by Death’s Headers, and, when we were lucky, Czechs, of whom there were many. Then I became so weak and exhausted that the doctor pronounced me a sick person and sent me to the krankenblock. An epidemic of spotted typhus broke out in the camp at the end of March. The number of those infected rose every day at an alarming rate and in the end the doctors stopped doing check-ups and marched whoever had a fever of over 38 degrees straight to the typhus ward. I was suffering from horrible diarrhea, and since I also had a fever, I, too, was placed among the typhus sufferers. Protests and screams didn’t help. I couldn’t escape from typhus in any case. There was nothing one could do about the everpresent lice. I lay for 10 days with a high fever and began to get better right when the order to evacuate the camp was issued. Whoever could walk went on foot; we, the sick, were driven by car to Landsberg (1st camp). I spent two horrible days there in indescribable squalor and with barely any food (at the time I weighed about 45 kg, my height being 187 cm). Finally, this camp, too, was evacuated, and although I could barely stand, I walked, or rather crawled, to the train station near Holzmann, which was situated about 3 kilometers away. There, they packed us onto cattle cars, and with the last of my strength I managed to get a spot in a covered car because I was afraid of the rain of and air strikes. My fears were justified. We traveled a distance of 30 km from Landsberg to Dachau for two days and two nights. On the last day and night it rained hard and constantly. We also experienced several serious air strikes – American pilots probably thought we were a military transport. Many ran away; I was too weak and didn’t move from the car even when the shooting was at its peak. About 3,000 of us left Landsberg and only about 1,000 of us made it to Dachau alive. About 200 ran away during the journey. These figures are not exact and are just my own estimate. In Dachau, we
insert_drive_file
Text from page3
went through the disinfection process during the night of April 28th, and then I slept like the dead for 15 hours. I slept through the constant shelling of the town all through the night and even when the fight reached the camp the following morning. Prisoners participated in the fighting, and by the afternoon the U.S. flag flew over the main guard tower. Our liberators arrived not a moment too soon, for we later learned that Himmler had issued a special order to shoot all of the Dachau prisoners on the evening of April 29th.

On behalf of the archive: Alex Schmiedt

Alexander Schmiedt, official report of found ID by the Police Directorate in Prague 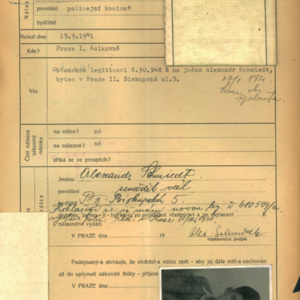 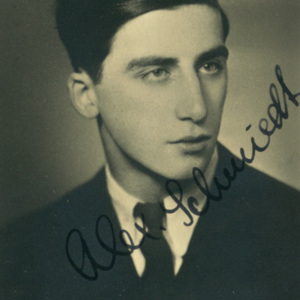 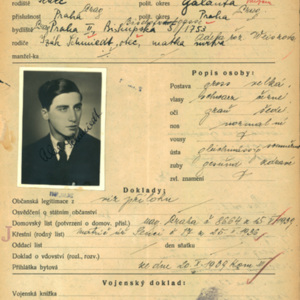 close
Thanks for your feedback!
zoom_in
insert_drive_file
3

A racist term refering to people of nordic origin.

Later name Shlomo Schmiedt. Before the war he lived in Prague. In 1942 he was deported to the Theresienstadt (Terezín) ghetto, from which he was sent in autumn 1944 to Auschwitz-Birkenau. After the war he was one of the important co-workers of the Documentation campaign (Dokumentační akce). Later Schmiedt emigrated to Israel.

In summer 1943 she was deported to the Theresienstadt (Terezín) ghetto, from where she was sent to Auschwitz-Birkenau. After the war she was one of the co-workers of the Documentation campaign (Dokumentační akce). In 1949 Kratková emigrated to Israel.

The SS-Hauptamt was founded in 1935, it was the Supreme Command of the Allgemeine SS, SS-Verfügungstruppe and SS-Totenkopfverbände.