What is an early Holocaust testimony?

How to select documents to be included in the edition, what establishes an early Holocaust account, and what can be considered a testimony in the first place? These were the questions confronted by the editorial team consisting of EHRI partner institutions, the Jewish Museum in Prague, The Wiener Library for the Study of the Holocaust & Genocide, Jewish Historical Institute in Warsaw, Hungarian Jewish Archives, Yad Vashem and later the Masaryk Institute and Archives of the Czech Academy of Sciences.

In the preliminary discussions, the edition team decided in favour of inclusivity as to the time of creation as well as the variety of documents which can be considered a testimony. Rather than to prefer a specific idea, we wanted to represent the diversity of early accounts of the Holocaust.

The experts from the relevant collection holding institutions (who, at the beginning at least, participated in the EHRI work package “New views on digital archives”) were asked to select a sample from their archives which best represent the early testimony. Variety of types of documents was explicitly encouraged - from protocols with survivors to questionnaires to letters testifying in a more formal way about the persecution. A testimony, for that purpose, was any document which aimed to capture in some form the experience of the Holocaust and record its events for others.

Taking into consideration the types of sources represented in the testimony collections, the team decided to capture a broader time span as well. For the purpose of this edition, “early” corresponds to any eyewitness account of the persecution of Jews from the Nazi takeover of power in Germany in 1933 to roughly the Eichmann Trial in Jerusalem in 1961 which invested the history of the Shoah and the testimony of survivors with a new meaning, and increased attention.

Some collections, such as the DEGOB (Hungarian Jewish Archives), the Documentation Campaign (Jewish Museum in Prague) and the Polish Jewish Historical Comission (Jewish Historical Institute in Warsaw) strictly present only immediate and early post WWII protocols with survivors.

Karel Abeles, on escape from Teplice, imprisonment in Łódź, Auschwitz and Gusen 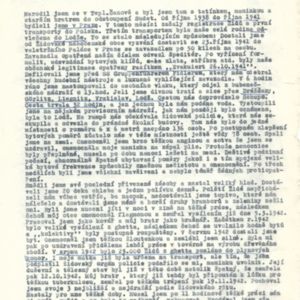 EHRI-ET-JMP012
1945-08-16 | Karel Abeles (later name Brožík) | Prague
Jewish Museum in Prague, Documents of Persecution, inv. no 80. Original in Czech.
Testimony of Karel Abeles (later name Brožík), which became a part of the “documentation campaign” in Prague. Abeles describes being forced to leave his hometown Teplice in the Czechoslovak borderland in the fall of 1938. His family moved to Prague,… 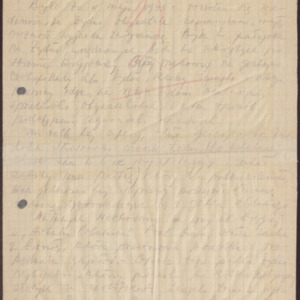 EHRI-ET-ZIH3010002
1944-09-04 | Dwojra Szczucińska
Jewish Historical Institute in Warsaw, Holocaust Survivor Testimonies (coll. 301), Dwojra Szczucińska Testimony (301/2). Original in Polish.
Testimony of Dwojra Szczuczyńska on the “Hotel Polski affair”, a Gestapo trap resulting in the death of about 3000 Jews who left their hiding places on the “Aryan side”, with specific reference to the role of Lolek Skosowski, a Gestapo agent.

S. W., male, on his experiences in Auschwitz-Birkenau, Buchenwald and Theresienstadt in 1944–1945 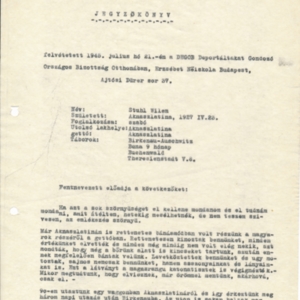 EHRI-ET-DEGOB1178
1945-07-21 | National Committee for Attending Deportees (DEGOB)
Hungarian Jewish Archives, DEGOB, Protocol no. 1178. Original in Hungarian.
Testimony of 18-year-old S .W. depicting ghettoization in Aknaszlatina/Slatina (Subcarpathia), deportation to and selection in Auschwitz, his suffering in the Buna-Monowitz labor camp and the youth block of the Buchenwald concentration camp, and his…
.

On the other hand, the Wiener Library represents the wider time span of the early testimony. It includes both pre-WWII documents (for example those from the collection of “Kristallnacht” reports from 1938) as well as protocols based on interviews with survivors living in the United Kingdom and taken until the late 1950s (such as the report of Ursula Finke regarding her underground life in Berlin).

Anonymous Jewish male youth, flight from Vienna in 1938 and experiences of antisemitic persecution leading up to it 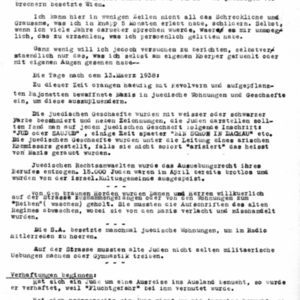 EHRI-ET-WL1375B189
1938
The Wiener Library for the Study of the Holocaust and Genocide, Kristallnacht Reports (coll. 1375), B. 189. Original in German.
Testimony of a 16-year-old male youth who escaped from Vienna in 1938. His report was forwarded to the JCIO in Amsterdam by Dora Prywes, Antwerp, c/o Menko Max Hirsch. He reports what he witnessed from 13 March 1938 onwards in Vienna, including… 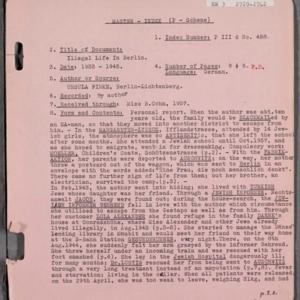 EHRI-ET-WL16560458
1957
The Wiener Library for the Study of the Holocaust and Genocide, Eyewitness testimony Collection (coll. 1656), 458. Original in German.
Testimony of Ursula Finke, who describes the increasing discrimination after 1933 and the blackmailing of her father. She finished school early and learned dressmaking. Finke was assigned to forced labor in a coat factory and moved to a “Jewish…

A similar approach was also adopted also by Yad Vashem, given the variety of its testimony collections, from the war-time Ball-Kaduri protocols to the post-WWII testimonies collected in the DP camps in Germany. 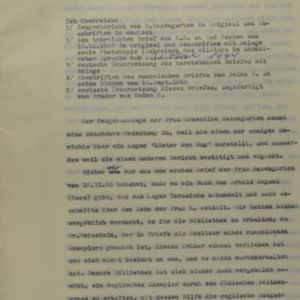 EHRI-ET-YV3549466
1958-04
Yad Vashem Archives, The Ball-Kaduri Collection: Contemporary testimonies and reports regarding the Holocaust of the Jews of Germany and Central Europe, 1943-1960 (O.1), file no. 3549466.Original in German.
Testimony and report of Ernestine Rosengarten, a survivor from Chernivtsi, about the fate of her son Heinz in the camp Tarasivka, Ukraine. The file includes various letters by members of Rosengarten’s family and by Dr. Ball-Kaduri, plus several other…

To increase accessibility and allow for easier comparison, the edition provides all testimonies in English. Yet, Holocaust documentation was a multi-lingual effort which the edition is designed to reflect. Alongside with English, researchers can switch to the original languages and read the text languages such as French, Dutch, German, Czech, Polish, Hungarian, etc. 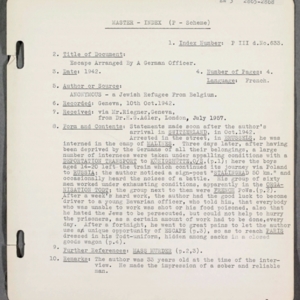 EHRI-ET-WL16560633
1942-10-10 | Gerhard Riegner
The Wiener Library for the Study of the Holocaust and Genocide, Eyewitness testimony Collection (coll. 1656), 633. Original in French. Translated for the Wiener Library by Sue Boswell.
Testimony of an anonymous Jewish refugee from Belgium. He was arrested on the street in Brussels in 1942 and interned in the Malines internment camp, before being taken by train to Russia, near Stalingrad. He was forced to work in a camp probably run… 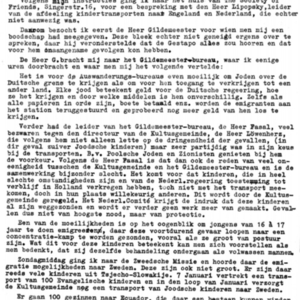 EHRI-ET-WL1375B226
1939-01-07
The Wiener Library for the Study of the Holocaust and Genocide, Kristallnacht Reports (coll. 1375), B. 189. Original in Dutch.
Report of a courier of the Dutch Children’s Committee about her experiences in the “Aktion Gildemeester”, a Nazi-run operation to evacuate Jews from Vienna, and the Swedish Mission. She writes about the difficulties surrounding the transport of…

Johanna Rosenthal, experiences in the Riga ghetto and various camps, 1942–1945 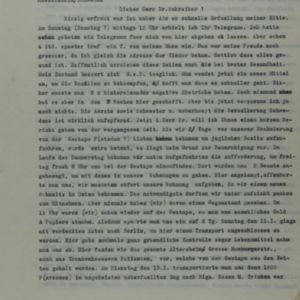 EHRI-ET-YV3549213
1945-05-26
Yad Vashem Archives, The Ball-Kaduri Collection: Contemporary testimonies and reports regarding the Holocaust of the Jews of Germany and Central Europe, 1943-1960 (O.1), file no. 3549213.Original in German.
Letter from Johanna Rosenthal, a survivor of the Jewish community in Potsdam, describing her deportation along with most of the community members to the Riga Ghetto, and some to the Kaiserwald, Stutthof, Salaspils, Bergen-Belsen, and probably…

Gerta Sachsová, the fate of her family during the WWII 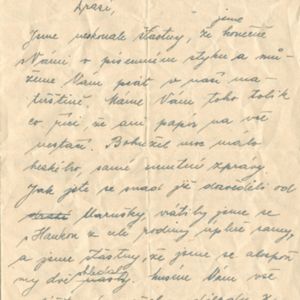 EHRI-ET-JMP003
Gerta Sachsová | Prague
Jewish Museum in Prague, Documents of Persecution, inv. no 80. Original in Czech.
Letter from Gerta Sachsová addressed to family friends. Sachsová was deported with her husband from Prague to the Theresienstadt Ghetto in July 1943, from where she was sent to Auschwitz in autumn 1944. Her parents and husband perished. Sachsová…

Leon Perelsztejn, the preparations and rebellion of prisoners in the Treblinka extermination camp 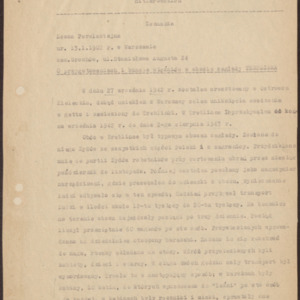 EHRI-ET-ZIH3010106
1945-03-09 | Leon Perelsztejn
Jewish Historical Institute in Warsaw, Holocaust Survivor Testimonies (coll. 301), Leon Perelsztejn Testimony (301/106). Original in Polish.
Testimony of Leon Perelsztejn, who after his arrest in Ostrowiec Świętokrzyski was sent to the Treblinka extermination camp, where he was assigned to work at the tool house. He describes the crematoria and methods of burning corpses as well as his… 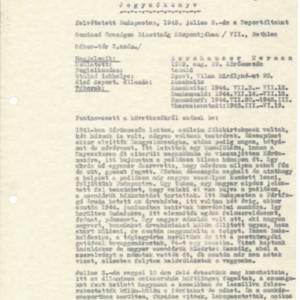 EHRI-ET-DEGOB0651
1945-07-03 | National Committee for Attending Deportees (DEGOB)
Hungarian Jewish Archives, DEGOB, Protocol no. 651. Original in Hungarian.
Testimony of 16-year-old K. H. on the deportation of his family to Kamenets-Podolsk in the summer of 1941, hiding in Kőrösmező/Yasina, finding shelter in a Jewish orphans’ home in Budapest, his arrest and deportation to Auschwitz, his experiences in…

Currently, the EHRI team is working on a set of more than thirty Yiddish testimonies, which should be added to the edition during 2020.

Since the edition is intentionally focused on representing a typology (and diversity) of Holocaust testimony from the early period, no effort was made to achieve a thematically balanced set of documents. The edition also aimed to capture the characteristics of written testimony and doesn't include audio or video interviews with the Holocaust survivors.

In short, the edition was designed to represent the diversity - in forms, situations, languages, etc. - which itself was a result of a search for appropriate forms of capturing the extreme experience of exclusion, persecution and murder, moreover in a period when the emotional traces of what we today call the Holocaust were still fresh. And as a digital and online publication, as an open-ended and ongoing effort, the edition also captures our growing understanding of the richness of the early Holocaust testimony.