None
chevron_left
Skip to main content
keyboard_arrow_left
Edita Ornsteinová, the history of the…
Ruth Morgensternová, description of…
keyboard_arrow_right

Karel Abeles, on escape from Teplice, imprisonment in Łódź, Auschwitz and Gusen

Testimony of Karel Abeles (later name Brožík), which became a part of the “documentation campaign” in Prague. Abeles describes being forced to leave his hometown Teplice in the Czechoslovak borderland in the fall of 1938. His family moved to Prague, from where they were deported to the Łódź ghetto. Abeles describes the harsh living condition in the ghetto, due to which his parents and brother died. In 1944, he was deported to Auschwitz-Birkenau and later to Gusen, where he was liberated.

I was born in Tepl.Šanov, where I lived with my father, mother, and older brother until the Sudetenland was annexed. From October 1938 until October 1941 we lived in Prague. That month, Jews were required to register and the first transports to Poland took place. Our entire family left on the third transport to Lodz. It happened like this: we received a summons from the Jewish Community to come to the Trade Fair Palace in  Prague on October 23rd, 1941, with a luggage limit of 50 kilograms per person. Our carrier brought our luggage, which was labelled with our number. After all of the formalities had been dealt with (handing over the keys to our apartment, and all of our gold, silver, etc.), our citizenship cards were stamped with Evakuiert 26. 10. 1941. We marched past SS Grupenführer Fidler, who took away all of our musical instruments and any luggage that looked fancy. At 6 o’clock in the morning, we boarded a passenger train that departed from the  Bubeneč train station at 1 o’clock in the afternoon. It traveled along a strange route through Dresden, Görlitz, Liegnitz, Vratislav, Lodz. Schupo accompanied us on this journey. The train ride lasted 32 hours, and we were given water only once. We got out on some sort of provisional platform. We later learned that this was Lodz. The Jewish police was waiting for us on the ramp, and it split us into groups and took us to an empty school building. There, 136 people were stuffed into a room measuring 6x6 meters. Our living conditions improved, and thereafter 78 people would stay in this room. We slept on the floor. I soon became sick with angina. Right after I got better, my mother came down with pneumonia. Because the hospitals were too full, she had to lie on the floor while she was sick. The rainy autumn weather, the abnormal accommodations, and the overcrowded living conditions produced a lot filth and made many people sick. After three weeks, we were all lice-infested and there was practically nothing we could do to prevent it.

We ate the last of the food we brought with us and then went hungry. We received 20 decagrams of bread and one soup per day. The Polish Jews didn’t help us, not a bit. We didn’t get the fuel for heating that we were allotted and received less and worse kinds of potatoes and vegetables than they did. We were forced to work hard at night during the winter, and as a consequence my father became ill with phlegmon and died of exhaustion on 5. 3. 1942. I worked as a blacksmith and my brother as a leatherworker. At the beginning of 1942, there were mass deportations from the ghetto, which emptied many apartments, and the collectives were gradually shut down. In June 1942, we were given an apartment. I contracted a bad case of hepatitis and I became severely weak. When I got better, I was assigned easier work in a factory that manufactured wooden products. In August 1942, 25,000 Jews from the ghetto were sent to the gas chambers. My mother was also supposed to be transported, but I bribed the Jewish police, and so I managed to free my mother. But her mental and physical condition was very poor at the time, and she died on 12. 10. 1942. My brother, who at the same time was tied to a bed with serious tuberculosis, died after having suffered greatly on 19. 11. 1942. I buried the 3 closest and dearest people to me according to the Jewish funeral custom.

This was a very difficult time for me. After an 11 hour work shift, I had to wash my own laundry, cook my own meals, and, worse, do my own shopping. I sold everything that I had, I earned my living, and that’s how I supported myself. In the autumn of 1943 we were given permission to send parcels to the ghetto. I received a parcel from my friend Heinz Prossnitz from Prague every week, which elevated my spirits as well as made me feel good physically. The liquidation of the ghetto began in May 1944, since the front was advancing. But we didn’t know that the line of attack stopped at Warsaw. Because we believed that the Red Army would arrive soon, we ignored the order to leave the ghetto and hid. Neither machine guns, nor

insert_drive_file
Text from page2
any other harsh measures against us couldn’t force us to leave the ghetto. We were terribly hungry and this forced us to report ourselves for transport. On June 22nd, 1944, we left Lodz in a cattle car, destination unknown. The next morning, we arrived at a place where the first thing we saw were giant chimneys with tall flames shooting up from them. We were greeted by prisoners in prison garb and when I asked them what is being produced in the factories, they replied with ironic smiles: chocolate. I didn’t believe that, but I had no idea that hundreds of thousands of our fathers, mothers, and children were being burnt in them. We were in Birkenau near Auschwitz. After the selection process, we were sent to work as expert mechanics and dismantled airplanes that had been shot down. Camp life, as has often been described, set in. I witnessed terrible things. Hungarian, Slovak, and Theresienstadt transports arrived. This lasted until January 1945.

The Russians once again attacked near Krakow and threatened Upper Silesia. We were evacuated on January 18th. The train connection didn’t exist any longer and so we set out in wooden shoes with blankets and one loaf of bread for the journey. We walked all night and day and our strength disappeared. The only thing we had left was our will and the hope of being liberated soon. Hundreds of dead bodies of those who marched before us and had already died lay at the edge of the roads. Finally, on the fourth day, we boarded a train somewhere near Katowice. They squeezed 120 of us into one open car and, without giving us anything to eat, we rode for 4 days and 4 nights. We were numb, like animals. In Mor. Ostrava and Přerov, the inhabitants gave us some food. The SS shot at them, but this didn’t stop them and they helped us however they could. On 27. 1. 1945, our death transport ended in Mauthausen near Linz. Without getting anything to eat, they sent us off to the hot showers and then they made us run naked and wet into an ice storm. We waited for hours until they let us into the block. There were 1,200 people in the building. I didn’t sleep for 4 weeks. The Czechs there stuck together and helped us get food whenever possible. In February 1945, I was transported to Gusen. This was the worst I have ever suffered. We worked in the underground Messerschmitt airplane factory under terrible conditions: not enough food, little sleep, dirt, back-breaking and long labor, bad air, beatings, and cold. I don’t need to go into the details, just the fact that in 3 months the camp had to take up a whole new workforce because the previous one died a natural death is enough. This means that in each block, which had 800 people, an average of 10 prisoners died every day. When I was at my worst, when my strength was starting to leave me, we were liberated: on May 5th the Americans disarmed our guards and all of the prisoners left the camp. I found shelter in the Czech civilian labor camp in Linz, where I quickly recovered.

On May 18th, 1945, I returned to Prague. None of my relatives returned. I am the only living member from the part of my family that remained in Europe.

Statement was accepted by:

On behalf of the archive: Alex. Schmiedt 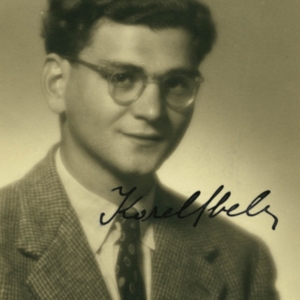 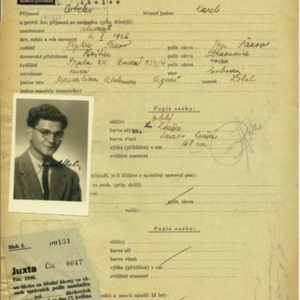 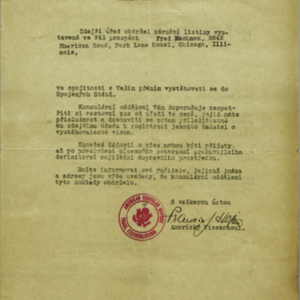 In summer 1943 she was deported to the Theresienstadt (Terezín) ghetto, from where she was sent to Auschwitz-Birkenau. After the war she was one of the co-workers of the Documentation campaign (Dokumentační akce). In 1949 Kratková emigrated to Israel.

Later name Alisa Shek. She lived in Prague. In 1943 she was deported to the Theresienstadt (Terezín) ghetto, where she has survived till the end of the war. Her later husband was Zeev (Vilém) Shek, with whom she emigrated to Israel in 1948.

Later name Shlomo Schmiedt. Before the war he lived in Prague. In 1942 he was deported to the Theresienstadt (Terezín) ghetto, from which he was sent in autumn 1944 to Auschwitz-Birkenau. After the war he was one of the important co-workers of the Documentation campaign (Dokumentační akce). Later Schmiedt emigrated to Israel.