None
chevron_left
Skip to main content
keyboard_arrow_left
Berthold Burg, the fate and death of a…
Heda Grábová, the cultural life in the…
keyboard_arrow_right

Zeev Scheck, the fate of children prisoners in the Theresienstadt ghetto

Jewish Museum in Prague, Terezín Collection, inv. no 343. Original is in German. Protocol is a Czech translation.

Testimony of Zeev Scheck, initiator of the “documentation campaign” in Prague. Scheck describes the situation of children in the Theresienstadt Ghetto and the role of Egon Redlich and Fredy Hirsch in the educational system of the ghetto, which he explains in detail. Most of the children in Theresienstadt were placed in so-called children’s and youth homes run by teachers and tutors, who looked after the mental and physical development of the children and offered them a meaningful use of their free time. Scheck also offers a brief statistic relating to the children prisoners of the ghetto.

Children arrived in Theresienstadt right with the first transports from Brno and Prague in 1941. Thanks to Gonda Redlich and Fredy Hirsch, who, faithful to the tradition of the youth movement that they were part of when they were young, immediately brought these children under their wing and procured better conditions for them in this worst of places, the first special rooms for children were soon created and, later, in February 1942, the first Home for Children. Several people from the ghetto administration understood the responsibility we had towards the children and we tried to find all kinds of ways to make their life in the ghetto easier. It was once again our Jakub Edelstein who, in the difficult and important discussion at the Council of Elders over whose slice of bread would be shortened or whose portion increased, swayed the decision in favor of the children with his courageous and lucid analysis. This perhaps unusually and cruelly disadvantaged the old, but at the time it was the right thing to do; it guaranteed a better future for the Jewish nation. This decision by the Council of Elders trickled down to all of the barracks, kitchens, and streets. Everywhere, children came under special care, they were given advantages, and if there was a happy sight in Theresienstadt, it was surely the happily playing children, who seemed so carefree. But those who worked in Theresienstadt with the children knew how sometimes a child’s eyes would glisten, knew the look that asked why? to which no caretaker knew an appropriate because, knew that when the children woke up at night they opened their eyes and saw an empty darkness, sometimes heard their silent crying that no medicine could cure, knew the complications and tragedy of a Jewish child and its soul. No textbook of psychology exists yet that can teach us how to soothe them.

For the children, life in the homes was led separately from the rest. In accordance with the principles of collective education, the individual rooms constituted closed homes, which set and managed their daily schedule. Besides their lessons, the children had to do domestic work and organized frequent evening programs. The caretakers lived with the children and thus they could significantly influence their whole lives. Unfortunately, there were very few qualified people, and the caretaker's incompetence sometimes led to a difficult crisis in the home. When the number of children in Theresienstadt reached its peak, i.e. in the summer of 1943, there were 2,300 children aged 4-18 receiving child care in the homes. Health services took care of children younger than age 4, placing them either in the home for infants or in the home for toddlers together with their mothers and the staff. Children were not forced to move into the homes. The open youth care looked after children who were outside of the homes. The institution of open care consisted of the home for mothers and children (without a staff), and Czech, German, and Hebrew kindergartens, attended by more than 500 children. Social nurses were also part of the open youth care. Children regularly visited them, and the nurses performed health check-ups and arranged all that was necessary for them, within the realm of possibilities. Children up to age 14 who lived with their parents went to the shelters every day, where they attended lessons in the most difficult circumstances thanks to the courage and devotion of the caretakers in the face of the Gestapo’s strict orders against them. Young people over age 14 who lived either with their parents or in homes were forced to work. To facilitate this, a special section for the integration of young people into the labor process was created in close cooperation with the youth section and labor office. In the summer of 1943, a total of 1,673 children were registered in this section. Young people were assigned the type of work that would allow them to learn something, for example in agriculture and gardening, crafts and production, healthcare and education. These young people

insert_drive_file
Text from page2
were also taken care of by a special apprenticeship commission that also administered exams once their training was completed. To help with all of these educational activities, a children’s library for children up to age 13 and a young people's library for older children were established. Besides the caretakers’ ethical and practical goals, the youth section tried to expand the children’s minds and thus stop the deepening moral decline in the ghetto. By pointing to the Jewish nation’s illustrious past and the life and work of the future, the caretakers tried to neutralize the dismalness and hopelessness of their situation.

Unfortunately, these efforts were in vain. Transports continued to arrive and depart; orders and bullying gave the children no peace. Around 15,000 children passed through Theresienstadt. A transport to the east meant a death sentence. In the beginning, it was possible to protect children younger than 12. But this age limit was gradually lowered, and in October 1944 even babies were transported.

All of the efforts and work, all of the mental and physical care, all of the individual and collective education led nowhere. They could only make the children’s stay in the ghetto a little easier.

They couldn’t avert their terrible fate.

Accepted on behalf of the Documentation campaign by: Weinberger

Accepted on behalf of the archive: Tressler

Application of Zeev Scheck for a resident permit 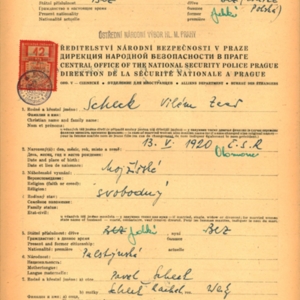 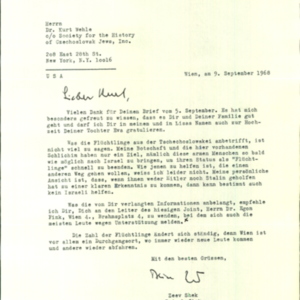 The archive records from the Terezín ghetto (24 November 1941 – 8 May 1945, and from the period after the liberation) are preserved only in fragments. Only a portion of the documents in the collection are connected with the official activities of the Terezín Council of Elders and with the various departments and sections of its self-government. The first group of documents comprise a relatively diverse range of maps, plans and drawings of the ghetto, the surrounding area, the housing blocks a...
5 archival descriptions available
View this item on the EHRI Portal
keyboard_arrow_left
Bernat Landau, experiences at camps in…

Born 1903 in Horodenka in Galicia. Died 1944 in Auschwitz. Czech Zionist and Director of the Palestinian Office in Prague which distributed immigration certificates for Palestine. Transported to Nisko in 1939, but allowed to return. Edelstein was appointed the first "Elder of the Jews" in Terezín. Transported to Terezín in 1941 and in 1943 to the "Terezín family camp" in Auschwitz-Birkenau in December 1943 where he was executed, together with his family, in 1944.

Later name Harry Tarsi. Before his deportation in 1941 to the Theresiensatdt (Terezín) ghetto he worked at the Jewish religious community in Prague. In autumn 1944 he was deported to Auschwitz-Birkenau. After the war Tarsi was one of the co-workers of the Documentation campaign (Dokumentační akce). In 1949 he emigrated with his wife to Israel.

On 1941-12-04, Eichmann appoints Prague Zionist leader Jacob Edelstein chairperson of the Council of Jewish Elders, responsible for the “self-administration” of Theresienstadt.

As the chief executive agency charged with fighting internal ‘enemies of the state’, the Gestapo functioned as the Third Reich’s main surveillance and terror instrument, first within Germany and later in the territories occupied by Germany. After 1933 the Gestapo became part of a complex apparatus of state and party police agencies.