None
chevron_left
Skip to main content
keyboard_arrow_left
Heda Grábová, the cultural life in the…
Šlomo Fuchs, Chaim Schwarzwald and…
keyboard_arrow_right

Testimony of Herta Bondyová describing in a literary way what followed after her deportation from Auschwitz to Bergen-Belsen. She tells emotionally the stories of her fellow prisoners and points out the harsh living conditions in the camp.

It’s freezing. We are forced to huddle together, cold and hungry with no hay in the railway cars. It doesn’t matter. The main thing is that we’re going away from here, where life hangs by a thread – Auschwitz. We want to live, so far all of us still do. So few of us are left.

It’s freezing. We get off the train. As if our lethargy had left us, all at once a thousand questions. How long have we been travelling? An eternity. Did we travel through forests, silence, nature? How long has it been since we’ve seen nature? Years. Where are we? What will happen?

There, a sign: Kr.Gef.Lager Bergen-Belsen. What, we’re prisoners of war? That would be wonderful, the girls speculate, and we slowly become interested in our fate.

We’ve arrived. Stunning, vast moorlands in full bloom, dark purple, with beautifully green thin pines greet us with their rustling. A smiling sun in its full beauty in a clear winter sky – it can’t be possible that we are going to our deaths. Not possible? Haha.

What is it? Several large circus tents. They’re quarters for about 12,000 women. On the ground, one on top of another. The stronger one has seized some hay to sleep on, the weak one has nothing but a blanket. There are no socks… only the lucky ones have pants… and it grows more freezing by the day – it’s November.

Maybe something or someone exists in heaven who can no longer look at the thousands of wretched, emaciated women undress and wash themselves outside, and there’s so little water and no rags to dry yourself with, and while you’re washing yourself someone steals your last piece of rag in their wooden clog. The sky turned a menacing color, the wind foreshadows a catastrophe. The tent canvases bulge. It’s the evening.

The book The Rains Came comes to me unbidden and I feel that something big is coming. Only lightning illuminates the terrifyingly dark landscape, you can’t hear your neighbor speak over the wailing wind – the canvases are billowing out more and more and the cries of the sick and our calls for help vanish in the canvases’ struggle with the wooden pillars. Suddenly, each of us is living for herself alone. Who isn’t thinking about their loved ones? Our time has come.

The main pole of the tent has become loose, the canvases and the wood slide between our bodies – panic, screaming, wailing,… Eva, Nita, Anča, Valina – are you alive? What, Helga? . . . In the morning, it became clear who didn’t make it. Out of the twelve tents, only one, badly damaged, remained standing.

This terrible night, during which the hair of many of us went white with fear, was followed by 36 hours in the fresh air before we set ourselves up in as yet unsettled barracks, where we slept in three-tier bunks, 2 in each bed, and each with only one blanket, beneath us a thin straw mattress. Here, we lived through December with no clothes, spoon, or handkerchief, and like children we looked forward to Christmas when we could perhaps receive an extra piece of bread.

Around December 12th, a story started to go around that the camp would be liquidated. Almost every day, larger and smaller groups would be selected and sent to work. Interestingly, we Czechs always boarded in an orderly manner, while female prisoners of other nationalities were constantly eluding, dodging, etc. We weren’t selected until December 20th – nobody wanted us, we were too weak. We’ll be left in peace over the holidays, I speculated, but we were lucky. On December 24th, when we

insert_drive_file
Text from page2
were so disappointed because we didn’t get even an extra crumb of bread, they selected us and we heard that we were to leave on January 20th. Czech women had a reputation of being good workers.

January in this camp was horrible. Transports arrived constantly and not a single morning went by when there wasn’t a heap of dead naked bodies (the most valuable thing about them was their clothes) in front of the barracks. A wagon came by regularly to collect them. Sick women were constantly returning from work in such a state that they were just dragging their bones back to bed. This is how our friend Dr. Wolfová returned. Fourteen days ago she was on her feet and now she couldn’t even get out of bed – she was covered in wounds… We were increasingly beset by lice, and, along with them, typhus. Blocks for the sick were the seals of the numbered days of your life.

Yesterday was January 20th and we still haven’t left. What? Are we sentenced to die here? Don’t we have to drag our bones to another region? At least to properly eat and wash ourselves – and then let God’s will be done.

It’s January 31th, it’s February 8th. Dessau, where we are going, has certainly been levelled. . . A miracle occurred. On February 10th, while the last turnip soup was being doled out inside the horrible transport block, where getting food meant winning the lottery, an order came. Girls, we’re leaving. Those who haven’t eaten yet won’t get anything, there’s no time (so that the block staff can eat even more).

We board. Hanka, one of our best, is not selected, but she can’t live without us, she’s one of the poor exhausted ones. We try to take her with us. She sneaks in with us. She’s fished out and returned. On shaky legs, she fearlessly tries again, but she’s beaten by an SS man until we look away. We say goodbye with painful looks. Hanka, our athlete, our girl who was so brave and not long ago recited things to us all night long, your little daughter is waiting for you – be with God. And Eva, who lived with her and took care of her so sweetly, we are no less sad than you. Have courage. We’re setting off at noon and happy to cast a last glance at the terrible blocks, wardens, roll calls.

What lies ahead for us? It shall be a surprise. 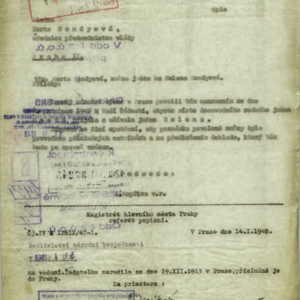 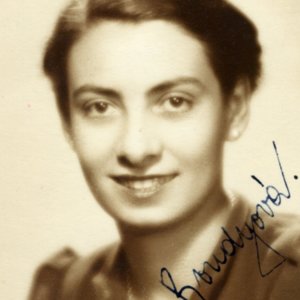 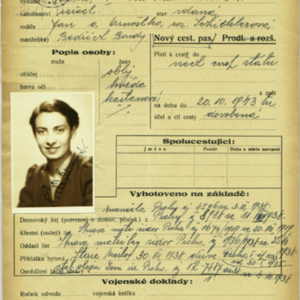 Subject: Prisoners from the Protectorate of Bohemia and Moravia